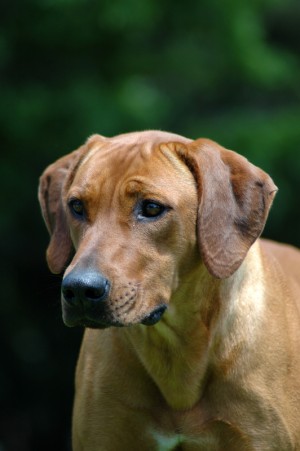 Diabetes Mellitus is the most common hormonal problem we see in dogs.

As in humans, the disease arises when the cells in the pancreas fail to produce the hormone “Insulin” when our dog eats something. After eating, glucose travels from the intestines into the blood and normally triggers the pancreas to release insulin. Insulin then acts like a lock to allow doors in our body cells to open so they can take up the glucose for energy.

When no insulin is produced, as in Diabetes Mellitus, the glucose stays in the blood and makes the kidneys think that the blood is concentrated and so this is when you are likely to see the first sign of this disease in your dog – excessive thirst.

Other common symptoms to look out for are

Treatment for diabetes in dogs is a daily insulin injection. The majority of dogs only need one injection a day but some dogs need two. It is important that the injections are given at the same time every day and the dog’s general routine must remain the same on a daily basis ie the same food fed at the same time and similar amounts of exercise each day. The food should be given before the insulin injection. This is because if the dog does not eat prior to the injection being given, it can make the dog become “hypoglycaemic”.

This condition occurs because the blood glucose level drops too low and your dog can collapse. This is an emergency situation and your dog should immediately be given some honey or glucose syrup and then taken to the vets.

Once the diabetes has been stabilised, your dog should start to drink less, be less hungry and gain weight. Unfortunately, diabetic dogs are very prone to getting cataracts due to the high glucose in the blood. This is very common even in stabilised dogs. In addition, diabetic dogs tend to be more prone to urinary infections.

Again no matter how well the diabetes is controlled, there is usually still some glucose present in the urine. This can cause bacteria to grow and result in an infection although this is treatable. 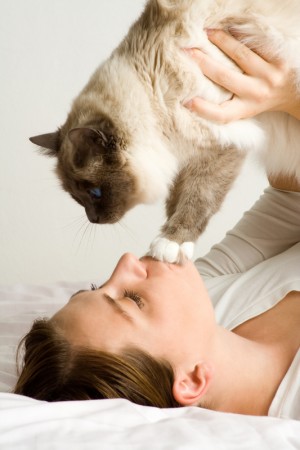 The symptoms of diabetes in cats are similar to dogs but the treatment is quite different.

Like dogs, cats need to have the daily insulin injections but because they have a quicker metabolism, they usually have to have the injections twice daily.

Compared to dogs who will eat a couple of large meals a day, cats tend to eat little and often throughout the day. Although it is important for the insulin injections to be given at the same time each day, most diabetic cats are fed ad-lib.

One noticeable sign of diabetic cats is that they are often overweight and it is recommended that these cats be put on a strict diet to lose weight. Obesity contributes to the disease and some cats can even return to normal once they have lost their excess weight.

If a diabetic cat becomes poorly and loses its appetite, this is a lot more serious than in a non-diabetic animal. The reason for this is that if they are not eating, they cannot be given their insulin injections so their body cannot use the glucose for energy. As a result, the body’s own fat and protein is broken down and used instead. This works for a short time but it causes the production of a group of toxins called “ketones”. If these build up they can make the animal become ketotic and this is life threatening in a diabetic animal.

The insulin must be kept in the fridge at all times because it is a protein.

The bottle must be gently shaken before giving an injection.

Clean needles and syringes should be used each time.

Fortunately, the needles used are very small so generally; cats do not feel anything when the injection is being given.

Looking after a diabetic cat is a big responsibility but once you have got used to giving the injections it soon becomes part of your daily routine.

Diabetic pets need more observation than normal pets and in view of the treatment required, insurance is always a good idea to consider just in case your pet ever suffers from the disease.