Henry is a three year old black Labrador from Gorleston near Great Yarmouth. He was rescued by his current owner Mark, who rescued him from an abusive former owner and brought him into a loving and devoted home.

This devotion and love shone through more than ever after Henry went on to suffer Hip dysplasia in both hips.  Henry had two bad cases which stopped him doing everything from running down on long walks at the beach, to even walking up to the stairs to bed.

“I was devastated by the onset of his lameness which really came out of the blue.  We used to go to the beach a lot and on one occasion I threw the ball for him and he was unable to run after it.  I immediately took him to the vet and we were referred to the Grove for further investigation.  It was distressing to see him in such pain.  However, the prompt diagnosis and action of the team at the Grove, led to a fast recovery.”

Henry went through two operations for each of his back legs.

During the time of Henry's illness and recovary, he was never alone. Mark's devotion to Henry was shown when he turned his sofa into a temporary bed so that he could keep Henry company during the long nights he couldn't make it up the stairs. Mark explained,

“It was hard to keep Henry quiet and still when he returned home to convalesce.  For a start, he had always slept with us upstairs and so I made a bed up on the sofa so that I could stay with him and keep him company.” 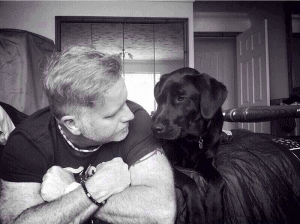 Luckily, Henry is now fully recovered and back to full running ways. He can enjoy the long walks on the beach and can tackle the stairs no problem. Mark is overjoyed and is full of praise for The Grove Referrals, the clinic which Henry was treated at.

“The resources and equipment at The Grove are state-of-the-art; easily on a par with the facilities at a human hospital.  Veterinary surgeon, Simon Gilbert, spoke to me at my level in layman’s terms. The communication was key to me and made such a difference to the situation. They always found time to update me on Henry’s progress.”

After the astounding recovery of Henry from both his surgeries, Mark concludes:

“We are slowly returning to normal and one of the best moments has been watching Henry once more run off the lead.”