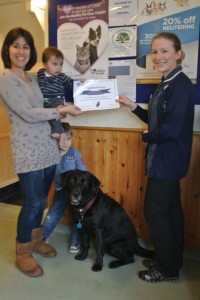 Mr and Mrs Amat, owners of a six year old black Labrador called Otis became the 150,000th members to join the scheme when they enrolled at the Cedar Vet Group in Ringwood, Hampshire, on 27 March.  They received a year's free membership to mark the milestone.

According to the Amats, Otis enjoys walking, swimming, visiting the beach and retrieving game on shoots with Mr Amat.  He also loves playing with their two young sons.  The couple made the decision to join the Healthy Pet Club when Otis was diagnosed with early onset arthritis and say they are looking forward to savings on services and treatment involved with the care plan for his arthritis, as well as on the vaccines, flea and worm treatment that are inclusive with Healthy Pet Club membership.