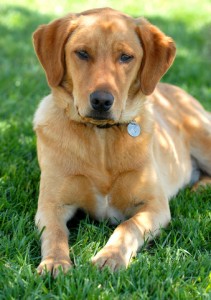 “Urine leakage” is a common condition which is usually seen in older animals and especially female dogs due to anatomical differences.

The bladder stretches like a balloon as it fills up and normally a sphincter acts like a stopper to prevent urine leaking from the bladder.

Owners often come in and mention that their dog leaves a wet patch after they have been lying down. The reason for this is often due to urinary incontinence, where the Sphincter (“stopper”) does not close the bladder tightly enough so that urine spills through it when the bladder is full or when pressure is applied to it such as when the dog lays down.

In older animals, reduced levels of hormones cause the lack of strength in the bladder sphincter. The incidence of this problem is slightly higher in spayed bitches although I would stress that this is far outweighed by the benefits of having your animal neutered. Females that are spayed early in life do not suffer from cancer of the mammary glands. Spaying can also avoid pyometra, a potentially fatal womb infection, from developing. In addition, you do not have the hassle of keeping your dog away from interested male dogs when she comes into season.

Fortunately, urinary incontinence is treatable. The most common form of treatment is a liquid, which is put onto the animal’s food 2-3 times a day. This acts directly on the bladder sphincter to keep it tight. There is also an alternative treatment in tablet form.

Before the animal is started on the medication, other problems need to be ruled out. The best way to do this is with a urine sample. This can check for problems such as diabetes that cause the animal to drink more. Obviously if the animal is drinking more, the bladder will fill up quicker and the animal will need to pass urine more often. This can sometimes be mistaken for incontinence as can Cystitis, which is another problem. In this case it may appear that urine is leaking from the animal when in fact the animal is actively squatting but only managing to pass a few drops of urine.

If the urine sample has no abnormalities, the animal can safely be started on medication for urinary incontinence so that hopefully there will be no more little accidents!