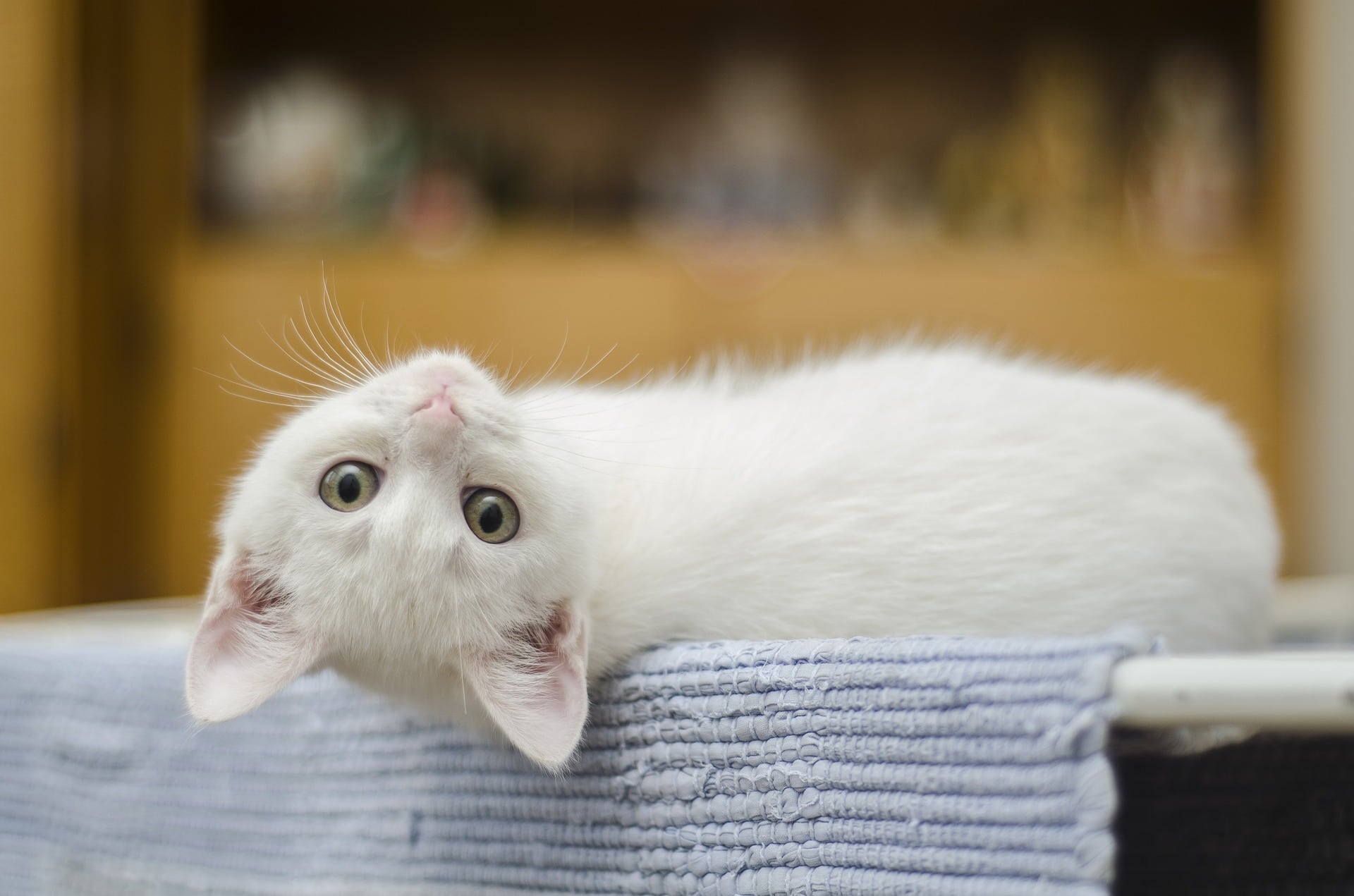 Spraying behaviour is seen commonly in cats, and refers to the habit of spraying urine up or across surfaces.  It’s more commonly seen in male cats but both males and females are able to spray.  Cats normally spray outside to mark territory, however if they spray urine in the house it suggests a problem.  Some cats will even spray on their owners clothing or face.  There are many factors to consider when dealing with a cat that sprays, which we’ve outlined below.

Is the cat urinating or spraying?

Firstly, it’s important to differentiate between true urine spraying, and inappropriate urination.  During true spraying behaviour cats stand with their tail erect, with the rear end elevated.  They may twitch the tail, pad with the hind feet, or pull a strange face before spraying a small jet of urine.  This is usually only a couple of millilitres of liquid.  Inappropriate urination is usually a normal sized urination in places other than the litter tray.

There are some problems that can cause both urine spraying and inappropriate urination, however leaving large volumes of urine in the wrong place can be a sign of more serious illness such as kidney disease or diabetes.  It’s therefore important that this doesn’t get passed off as spraying, and a more serious condition goes unintentionally ignored.

Is the cat neutered?

Spraying urine is significantly more common in un-neutered cats, both male and female.  If your cat has started spraying and is entire, you should speak to your vet about neutering.  Spraying often starts around six months of age as cats reach sexual maturity.  Spaying females and castrating males will reduce or stop spraying behaviour in up to 95% of cats!

As a Healthy Pet Club member, your cat can benefit from 20% off neutering!

Is there a medical cause of spraying?

It’s estimated that approximately 30% of cats will spray urine for medical reasons, rather than behavioural problems.

The most common medical cause of urine spraying is cystitis; which is an inflammation of the bladder.  This can be caused by bladder stones or infection but there is often no known cause in cats. There’s lots of evidence that cystitis is related to stress in cats, a syndrome known as feline lower urinary tract disease (FLUTD).  If left untreated male cats are at risk of urinary blockage.  This is where grit or stones obstruct the urethra, or inflammation causes it to go into spasm.  If the urethra is blocked the cat can’t pass urine, and will quickly become very sick.  This is an emergency and needs immediate veterinary intervention.

Some cats may adopt a more upright position to urinate, similar to spraying, due to pain in the hips or spine.  This can be due to a previous injury or osteoarthritis developing with age.  Other signs may be present such as reduced willingness to jump, sleeping more, and grooming excessively around the affected areas.  Joint pain can usually be identified on examination and successfully treated with pain killers.

All cats who suddenly start spraying should initially see a vet to check for an underlying cause.

Could the cat be stressed?

If no medical cause is found for spraying behaviour in a neutered cat, the most likely reason is stress.  Cats are very independent animals and don’t readily show signs of weakness; causes of stress may also not be easily apparent to us.  Common causes include:

Spraying is primarily a territorial marking behaviour and cats are not naturally sociable animals.  Unfortunately, this means another common cause of stress is households with more than one cat.  Often conflict between individual animals is subtle to spot and doesn’t always involve direct fighting.

Ultimately, the best solution for stress-related behaviour is consultation with a specialist veterinary behaviourist.  This can be expensive but is often covered by pet insurance.  In the meantime, the following tips may help:

Consider a feline pheromone diffuser such as Feliway in the area your cat spends most time (Feliway spray can also be used instead of surgical spirit). Healthy Pet Club members get 10% off Feliway products when bought from their veterinary practice.